One day around 25 years ago I was thinking of taking a karate class.  I spoke to the instructor on the phone, and he said come and observe a class and see if you like it.  So I did, and he was kind of cute, and I guess because he had his black belt on, he looked very strong and powerful.  We locked eyes from across the room.  I felt a shock going through my neck. Was this love? It sure felt strange, so I skidaddled out of there.  Now I know what that bolt of lightening was. It was one of the symptoms of cervical dystonia, something I’ve had for years, but I only just learned what it was. As I tried to keep my head still, it had caused that weird feeling in my head and neck. 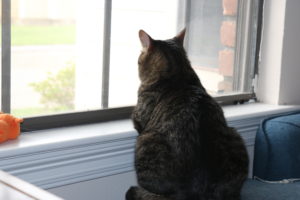 Before I knew I had dystonia, I thought I was just a nervous and socially dysfunctional person.  Why did I shake so much? When I would go out with my friends, I would go off on my own to light my own cigarettes (NOTE: I have not smoked for years and if you need help quitting that’s one of my next projects!). Anyway, I hid when lighting cigarettes because if someone offered to light it for me I was afraid my head would shake. I thought it was nerves. So when I went out, I drank more. In fact, I made sure that most of my outings and dates involved having drinks, so I could relax and my head wouldn’t shake. After I had a few drinks, either my head didn’t shake, or it did shake but I was too drunk to notice or care. You can say I became a lush because I was embarrassed that my head shook.

I attended an Anglican Catholic church for a few years.  To receive communion in this church, we knelt at the altar, and the priest would hold the chalice and we would drink from it.  (A beautiful ritual!)  I stopped taking communion because I was embarrassed that my head might shake. I again thought it was nerves, shyness or social anxiety.  I didn’t tell anyone about my problem, so people must have thought that I wasn’t taking communion because I was commiting some great sin or I was having a faith crisis.  For some reason, I thought it was better for people to think that than to admit the truth – that my head shakes.

As time went on, the symptoms of my dystonia became a part of my life that I dealt with all of the time, but not always consciously.  I developed little habits to cover it up that I wasn’t even aware of.  Once, when I was at a seminar, the speaker looked at me, and said “I see you nodding your head, what did you like about what I just said?” I was taken aback – I was nodding my head in agreement because that was one of the habits I had formed to hide my head shaking.  I sputtered out something that I hoped sounded intelligent in response to her question.

I still didn’t realize how noticeable my head shaking was.  One day when I was volunteering in my church’s bookstore, a lady came up and said “you know, there are great medications for Parkinson’s nowadays.”  Boy was I angry. I said I DO NOT have Parkinson’s and mind your own business.  Although at that time, I didn’t know whether I had Parkinson’s or not. I didn’t know what was wrong with me.  I am basically a healthy person.  Not too long after that, a friend and I had dinner, and she said my daughter thinks I have Parkinson’s.  I notice that you shake, have you looked into why? That’s when I started to see that I wasn’t hiding anything, my head shaking was noticeable to everyone.

That was the last straw. I started going to doctors’ offices, I had MRIs, they tried different medications. Still no answers.  Finally, I went to see a neurologist. 5 minutes into our visit he said I know exactly what it is – it’s cervical dystonia.  I had been having this for years and years, and always thought it was a social or a mental problem. But it is a purely physical problem.  It’s not an illness, it’s a muscle spasm. It is a movement disorder.  In my case the muscle spasm is in my neck. It pulls my head down towards my shoulder, and the muscle on the other side tries to pull my head back, it’s a constant battle going on in my body. One of my shoulders is higher than the other. You can sometimes mask the symptoms by touching your face or the back of your neck, so you will see people with dystonia touching their chins or their faces a lot. It’s why whenever I’m seated at a table, my chin is usually resting on my hand. If it wasn’t, my head would be shaking. This makes it very hard for me to sit still and be comfortable, so I have to change positions often.

Very few people know that I have dystonia, although they may have noticed that my head shakes.  I just said to my doctor today that my friends in the past said they didn’t notice my head shaking when I would mention it to them, and he said oh, they notice it. So I thought I was hiding it, but evidently not.

Having dystonia makes it hard for me to sit at a computer for a long time. It makes job interviews pretty tough too.  When I am stressed, my head shakes like crazy.  But I lived with it until I realized that I have to do something about this now that I will be working as a social worker.  I realized how my dystonia looked to others when I was working with people who were on probation and parole.  From my past articles, if you read them, you would know that I LOVED these guys.  (See my article Cupcakes, Love and Memories).  I was not afraid of them at all. But they saw my head shaking and they thought I was afraid of them. Luckily, some of the guys don’t have a lot of social boundaries, so sometimes one of them would say “hey, why does your head shake???”, and I was able to explain what it was to the class. But I really didn’t like talking about it. I don’t know why.  But now that I am getting ready to work as a counselor and a social worker, I need to get this fixed.

So, after jumping through a lot of hoops for insurance purposes, and many delays because of changes in insurance, today I had my first botox injections in my neck. I have never looked so forward to being stuck with needles in my life!  Anyone who knows me knows that I whine and cringe in fear when I get a flu shot. But I actually looked forward to these shots.  I literally counted the days until July 27th.  I went into the doctor’s office and cheerfully said “bring it on!”  It will take some time for the botox to work, and I will have to have the injections every three months. I’m praying it will work so I will again be able to sit still like other people. The doctor is incredible, and he’s very optimistic about my prognosis.

Another thing I learned from my doctor is that I’m not alone. I’ve never met anyone who has cervical dystonia, but I hope that will change.  In the next few weeks I’m going to start a support group for people with dystonia to come together and talk about it. Maybe we will be able to work out how to tell others “by the way, my head is shaking because of dystonia, not because I’m afraid of you.”  I am looking forward to seeing what’s next as I begin to openly deal with this dystonia journey.